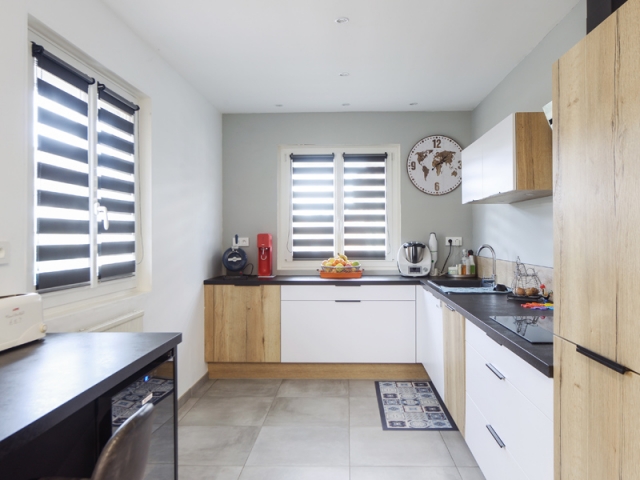 Dilapidated and old-fashioned, this kitchen needed a serious facelift. Redone from floor to ceiling in a very modern style, it has gained in functionality and comfort, all on a tight budget. Before / after in pictures.

After renovating their new home, the owners wanted to tackle the last building site: the kitchen. Dilapidated and old-fashioned, this one badly needed to be modernized. They therefore called on Yann Michel, from the Raison Home network, to help them transform the room. “The original idea was to open the kitchen, but they couldn’t think of each other” he explains to us. The professional therefore guided them in their project. “The room being quite narrow, we could not open anyhow. We therefore started with the idea of ​​enlarging the perspective to have an eye on the living room”. Another constraint: an envelope calculated as accurately as possible. To limit the cost of the work, Yann Michel has chosen to keep the same plan. “The challenge was to make an original cuisine, which is a little out of the ordinary, on a tight budget”. The contract is fulfilled. The new kitchen is now open to the living room thanks to a glass roof, and has all the comforts of a contemporary kitchen. To create relief and give the room a little personality, Yann Michel has bet on the contrast between matte white and wood-effect facades, and an anthracite gray worktop. Functional and warm, the kitchen also has an extra dining area. Visit in pictures.

Before: an old-fashioned kitchen

Before: an old-fashioned kitchen © Raison Home

With its dark facades, floral wallpaper and old-fashioned earthenware, the kitchen needed a good facelift. To modernize the room without going beyond the budget, Yann Michel has chosen to keep the same location. “The plumbing was difficult to move. We were also constrained by the location of the radiators and the height of the windows” indicates the professional. The trickiest thing was to open the room onto the living room, but also to put down the tiling which, with its small tiles, gave it a bit of trouble.

Before: an old-fashioned kitchen

Completely refitted, the kitchen has gained in functionality and comfort. It now has a large L-shaped worktop and a large storage space. To keep the perspective and not overload the room, Yann Michel favored low elements and hid the household appliances as much as possible. “The cupboards integrate the refrigerator and the ovens. The dishwasher is also hidden behind a facade under the worktop”.

A kitchen full of contrasts

“To get out of the all-white kitchen, we chose matte white and wood-effect fronts to create an alternation” explains Yann Michel. The worktop, a slate decor laminate, also brings contrast and gives relief to the whole. “The splashback matches the facades and is only 20 cm high. This allows a certain lightness to be retained with finer lines”.

A kitchen full of contrasts

Before: a narrow and closed kitchen

Before: a narrow and closed kitchen © Raison Home

Narrow and long, the kitchen looked like a hallway. To create a feeling of greater volume, the owners wanted to open the room onto the living room.

Before: a narrow and closed kitchen

After: a glass roof between the kitchen and the living room

After: a glass roof between the kitchen and the living room © Raison Home

Cleared of part of its partition and embellished with a glass roof, the kitchen now benefits from an enlarged perspective on the living room. It seems to have gained in volume and also offers more fluidity to its occupants.

After: a glass roof between the kitchen and the living room

This was another request from the owners: to be able to have a dining area to have breakfast. Yann Michel has therefore set up a bar plan at the corner of the glass roof. “This small snack area also allowed the wine cellar to slide without overcrowding the rest of the room” he specifies. It matches the worktop and echoes the structure of the canopy.

Also read :   How to choose the right kitchen pan? 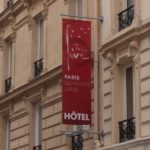 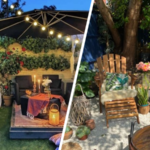