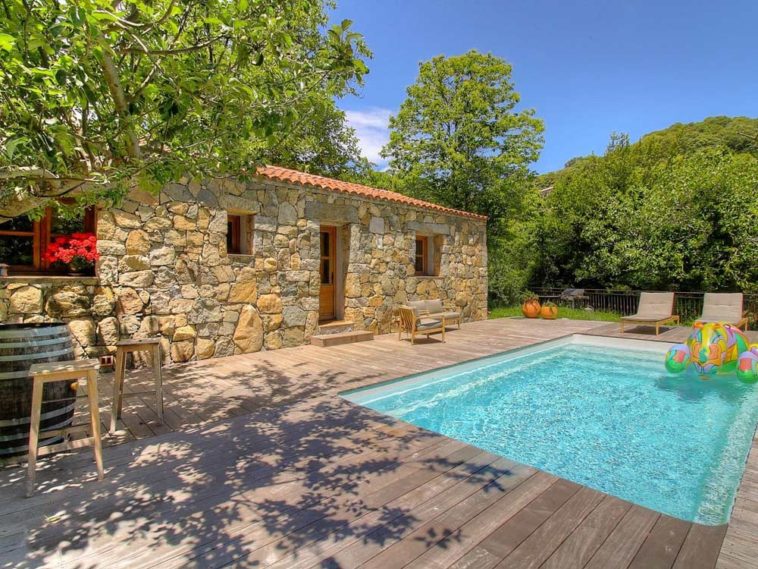 Nestled in the heart of Alta Roca, in the south of Corsica, this old sheepfold has been skillfully rehabilitated and transformed into a guest house. The building, which has retained its authentic character, is the perfect alliance between respect for tradition and modern comfort.

Restored in the rules of the art, this old sheepfold has the character and authenticity which make the charm of Corsican landscapes. The building was in ruins when its owner decided tomake it a guest house. “There were only three walls left, there was no more roof” Edouard Piereschi tells us. “The original house unfortunately could not be saved”. However, there is no question of making a clean sweep. Each building stone, in the family for generations, has been reused and reassembled one by one. The house has also been enlarged. “It was very small, only 35 m2 on the ground with one floor. Now everything is on one level” explains this enthusiast, who himself carried out a large part of the work with a priority: respect traditional architecture of the region and enhance this family heritage. Two years were necessary to rehabilitate the property and make it a welcoming and warm gîte, in perfect harmony with its environment. Inside, the house, with its old charm, combines simplicity and modern comfort. And again, every detail has been taken care of by the owners. “We wanted to do something that looks like us, something simple, sincere”. A commitment that does not only appeal to tourists: labeled Gîtes de France, the house was one of the 5 finalists selected for the 2021 coup de cœur prize for the most beautiful gîte. Visit in pictures.

An old sheepfold rebuilt in the tradition

An old sheepfold rebuilt in the tradition © Gîtes de France

Abandoned for years, the building built in the years 1860-1880 was in ruins. “Out of respect for the place and its family history, I wanted things to be done in the tradition. All the materials were therefore recovered and reused” explains Edouard Piereschi. Each stone was thus reassembled one by one to restore the old sheepfold according to traditional methods. Baptized “A Funtanedda” (small fountain in Corsican), the residence was considered as a small haven of peace.

An old sheepfold rebuilt in the tradition

A sunny terrace and swimming pool

To enjoy the sun and the privileged view of the wild and green landscape of the heart of Corsica, a warm wooden terrace of 100 m2 as well as a swimming pool have been set up outside. “It was essential, it’s also what people come looking for when they go on vacation, a nice place to relax”.

A sunny terrace and swimming pool

A guest house with old charm

Inside, the owners have also made it a point of honor to restore all the authenticity of the place. The house thus has the old charm of old buildings, but all the comforts of modern buildings.

A guest house with old charm

A house full of character

Edouard Piereschi also took care to highlight the identity of the residence. The oak frame was thus rebuilt with the wood of the original house. For the rest, the owner has favored noble materials. A solid oak parquet, for example, dresses the floor. “We have chosen quality materials to also tell ourselves that what we are doing today will last and will still be there for many years to come” he specifies.

A house full of character

The large living room is articulated between the living room, the dining area and the kitchen. An open and friendly interior, designed to meet and share moments of relaxation with family or friends.

A kitchen that is both modern and rustic

A cuisine that is both modern and rustic © Gîtes de France

The kitchen is just like the house: a subtle mix of raw and old elements, and ultra modern equipment. Sink and stone worktop thus rub shoulders with an American refrigerator and appliances with a refined design. “For example, we have installed a real Lacanche piano in the kitchen”.

A kitchen that is both modern and rustic

Among these old elements which give the house all its character, an old stone sink. “We took it from a garden. It had to be adapted to be able to install it, but it fits perfectly into the kitchen” emphasizes Edouard Piereschi.

The house has two bedrooms, furnished and decorated with the same simplicity and the same sense of comfort. Each enjoys a calm and bright environment, open to the soothing expanses of this very natural landscape.

As in the other rooms of the house, the decoration of the rooms gives pride of place to old elements. A window recovered from the ruins of the old sheepfold and restored finds here a second life, as a headboard. For Edouard Piereschi, all objects have a story, which is what makes “the houses have something to tell”.

In the bathroom, elegance and simplicity are once again present, always with this concern to combine modern comfort and authentic spirit.

Also read :   Amazing designs for gypsum decorations for the ceilings and walls of bedrooms and living rooms 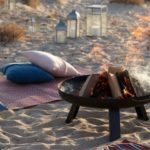 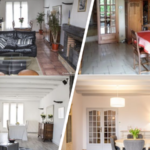